Our hospitals and emergency departments remain open. We're here if you need us, e te whānau.

Total strangers have given me a new life.


Murray Heasley does not look like a man who has had a liver transplant. He has just turned 70, walks 15,000 steps a day and is planning to build a school in the Philippines. In fact, that’s exactly where this story starts. 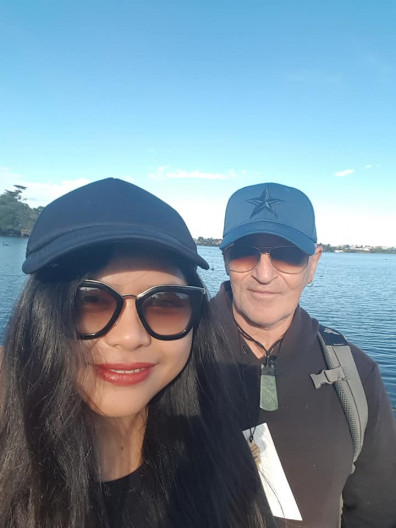 “My wife Analyn and I were getting set to leave for the Philippines in April 2020 when COVID-19 struck,” Murray recalls. “We were going to help start a secondary school for poor kids who were academically gifted.”

A week after their plans were upended by COVID-19, Murray says he noticed blood in his urine. This took him straight to Auckland City Hospital for tests. It turned out to be bladder cancer. It wasn’t life-threatening, but the growth had to be removed.

It was a shock when at a follow-up visit with the urologist at North Shore Hospital, Murray was handed scary news. He was told they had removed the bladder cancer but found a growth in his liver. Due to its position and multi-nodes, it was inoperable.

Murray went home and told his distraught wife. In the days that followed, he spent a lot of time walking on the beach mentally preparing for death; even talking to his wife about life after he was gone.

But a chance conversation with a friend spurred Murray to go forward for a liver transplant. He discovered it was the hardest list to get on.

“For good reason, they make you jump through hoops,” Murray says. “Your lungs and heart have to be up to it. You have to pass physical and psychological tests. Luckily I have always been fit, hadn’t had a drink in years and stopped smoking twenty years ago.

“When Dr Dominic Ray Chaudhuri [Clinical Director of Liver Transplantation at Auckland City Hospital] told me I was on the list, it was like winning the lottery.”

Murray says the medical team were fantastic at explaining what he was in for. “I was informed about every aspect; wait times, that I would have a hundred tubes sticking out of me when I came out of surgery, what could go wrong, rejection, infection. So I did not go into it with fear.”

Murray’s luck continued. He had prepared for a 3-5 month wait but within six hours of being told he was on the list, he was asked to come in the following morning for a possible transplant. The donor’s liver was assigned to someone else, but Murray would be the back-up.

Murray recalls being whisked into Ward 71 – the country’s only liver transplant unit – for pre-op tests. As it turned out, the first person on the list could not take the transplant that day, so at 1pm Murray became liver transplant number 902. Dr Peter Johnston, Murray’s lead surgeon, would go on to do three more transplants in a three-day period.

The operation went smoothly, but the Heasley family never expected Dr Johnston to personally let them know. Analyn remembers getting the call five hours after Murray went in. She instantly thought the worst, but instead, it was Dr Johnston who said that the transplant had gone as smooth as silk and that Murray was in the ICU recovering. She was touched that such a busy man had taken the time to reassure her after the operation.

Murray’s biggest emotion is gratitude. “Total strangers have given me a new life, from the donor to the medical team,” he says. “Some family went through a horrible tragedy to allow me this privilege. I want them to know I will remain the guardian of the spirit of their loved one. I also felt for the patient who did not receive the transplant that day. Hanging about and waiting is hard.”

He rates the Auckland City Hospital Liver Transplant Unit as world-class. “From the doctors to the nurses; the anaesthetists, radiologists and phlebotomists, to the orderlies and physiotherapists – not only are they great at what they do, but they are also kind, courteous, respectful and sensitive,” he says. “I was constantly monitored and kept informed. The one or two hiccups I had after my transplant were treated promptly.”

Murray knows he is a lucky man. “If I hadn’t got the low-grade bladder cancer, I wouldn’t have known about the liver cancer,” he says. “I was blessed that my illness was discovered in this city where the best medical care is available. I’m cancer-free and have a wonderful wife who’s happy I’m alive.”

Murray still plans to go to the Philippines with Analyn to build that school. He believes he should do what he can to ensure the gift he’s been given is not wasted.

← Back to the news